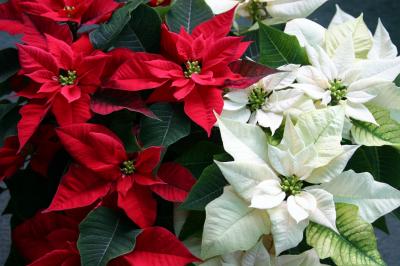 No flower matches the holiday season like the beautiful crimson-hued Poinsettia. With its bright and lush “petals”, the Poinsettia has become deeply embedded in the popular subconscious as the official flower of the Yuletide season. It can be found adorning houses, churches, offices, and commercial establishments come Christmastime.

The reason it has been so closely associated with Christmas is because of the legend surrounding it. According to the folklore, there was once a poor Mexican girl named Pepita who was depressed because she did not have a present to offer to the infant Jesus at their village’s Christmas Service. As Pepita was walking on her way to the village chapel, she came across her cousin Pedro. Pedro cheered the downcast Pepita by telling her that “even the smallest gift, if it was given by someone who loves him, would surely be appreciated by Jesus”.

While Pepita was gladdened by this, she still had no idea what to give. In the end, she picked a small handful of weeds growing by the roadside and made her way into the chapel. By the time she reached the nativity scene, she felt a little embarrassed but encouraged Pedro’s words, she approached baby Jesus and placed her bouquet of weeds by the bottom of the manger.

All of a sudden, the bouquet of unremarkable weed bloomed into lush scarlet and pristine white flowers. The villagers who saw the transformation declared it a miracle and named it Flor de Noche Buena or the Flower of the Holy Night. The shape of the Poinsettia flower is believed to represent the star of Bethlehem that led the three wise men to Jesus on Christmas Eve. The white colored Poinsettia are said to symbolize Jesus’ purity and the red ones symbolizes his mortal blood.

The flower, as the legend suggests, is indigenous to Mexico. Although it had been used as a Yuletide décor by Franciscan friars in Mexico since the 17th century, it was thanks to the effort of Joel Roberts Poinsett that the flower reached worldwide renown.

At the time, Poinsett was appointed as the first US Ambassador to Mexico by then President Madison. While going around the country in 1828, Poinsett was captivated by the flowers’ bright red bloom and consequently sent samples of the plants back to the United States for cultivation. As such, the flower was called after the name of the man who introduced it to the rest of the world.

During ancient times, Aztecs would gather the flowers from the tropical areas where it would bloom in the winter and would use it for practical purposes. They named it Cuetlaxochitl which roughly translates to “Flower that withers, mortal flower that perishes like all that is pure”. The purple dye that they would extract from it was used as a cosmetic product while the milky white sap would be used to treat fevers.

The last King of the Aztecs, Montezuma, would adorn his palaces with the plant. In their culture, the flower’s red bloom is grimly reminiscent of the sacrifices that the gods had made to create the universe and the debt which would be paid with human sacrifice.

There is a widespread rumor that the flowers are incredibly poisonous. According to the urban legend, the two-year-old child of an Army officer stationed in Hawaii died of poisoning in 1919. Fortunately, the story was just fiction. According to a study, a 50-pound child would have to consume more than 1.25 pounds of Poinsettia (about 500 to 600 leaves) before any ill effects take place. Even then, the only effect it would have is occasional vomiting (something that can be said about ingesting just about any type of leaf in the wild).

In present day, Poinsettias are the best selling plant in the United States and Canada. It contributes over US$250 million to the US Economy at the retail level. California holds the top position of Poinsettia production in the world.